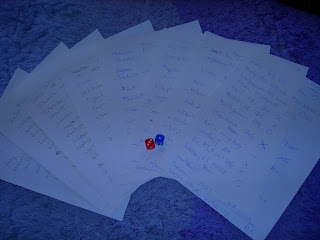 My donation project ended this noon.
I have got 115 donors, played 102 matches with 97 players (6matches are still playing on Dailygammon) and raised about $7000 including my $1500.
I don't know exact amount of all the funds, because 60% of the player chose local RED CROSS which goes to victims of Japan's earthquake as a receiver.
Total funds I received is 3192.72USD and it will be donated  on 31st of March along with my 1500USD in equivalent japanese yen.
I will study and search for the best organization to donate, but most probablly I will use Japan's Red Cross. I will show a receipt here.

The reaction to my project from backgammon community was fast and warmful.
They are all sympathized with us and concerned my safety. Even people I have never met before sent me a donation through paypal. Some of them kindly offer me not to play simbolic 3p match so as to have more time with others.
These three days is memorable for me because I played most matches (102 matches have been played) and I talked with more than 100 people.

Thank you so much to all.


Although I ended this project, donation should be continued.

As I wrote yesterday, WBA and Play65 hold a charity backgammon tounament.

WBA and Play65 have decided to contribute their share to help the victims of the catastrophe.
An online backgammon charity tournament will be held on 29th of March 2011 at 20:00 GMT. The winner will be awarded with a WBA Anniversary Board (limited edition) with the serial number 113 (a date not to forget).
Entry fee is 10€ only with no rake. All entry fees collected will be donated to UNICEF to support Japanese children in distress.
http://www.bgonline.org/forums/webbbs_config.pl?read=91675
Here is a useful link for the donation.
http://livingsocial.com/redcross (they will match your donation)

You can also send me funds through paypal. (mochy@backgammon.gr.jp)

bgmochy
My name is Masayuki Mochizuki (aka Mochy). I am the 2009 backgammon World Champion and am currently ranked #1 in the Backgammon Giants list. If you are interested in watching my lectures or those of other world-class players, please visit my educational site, Back-Gammon.TV. I have created this blog, however, purely for my own study. Here I will post positions and themes that I find interesting. Any feedback concerning my commentary, English, or analysis is welcome. Thank you. Mochy