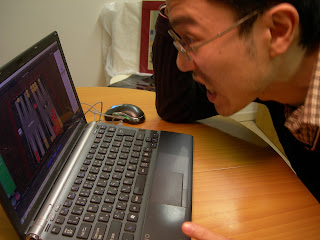 1st WSOB HEADS-UP CHAMPIONSHIP in PlayWSOB was over and I was lucky to triumph in the war against current #27 Backgammon Giant Jürgen Orlowski (though he is deserved to be better ranking).
The match was commentated by Paul Weaver and Chris Bray so thet kibitzers could enjoy world class games with analysis by world class lecturers. I would like to thank them again here.

Jurgen played very well. I thought he was the best player I had played in 2011 except Falafel.
Whenever I play backgammon against human, they always make obvious mistakes and that make me feel confident and comfortable. However, Jurgen did the oppsoite - I couldn't point out his mistake - so I even chatted "I don't like this opponent" in the game as a joke.

It wasn't easy matches for me also because I had to start the match at 23:00 in my time and ended in almost 4:00 in the morning. (We played two matches per day but I made a lot of comments during the game - it made a match much longer than usual) So I and my wife celebrate my win with coffee and toast in the morning instead of champagne and a dinner.

I am going to show some key cube actions from all four matches here.
We made a big blunder almost every position shown below. The reason why it was so difficult was that the score is lopsided. It changes cube action drastically.

(One roll earlier, the position was this. White (Mochy) was playing for Gammon!!!)


Answers and analyses will be posted in 48 hours. Comments are welcome as always.

bgmochy
My name is Masayuki Mochizuki (aka Mochy). I am the 2009 backgammon World Champion and am currently ranked #1 in the Backgammon Giants list. If you are interested in watching my lectures or those of other world-class players, please visit my educational site, Back-Gammon.TV. I have created this blog, however, purely for my own study. Here I will post positions and themes that I find interesting. Any feedback concerning my commentary, English, or analysis is welcome. Thank you. Mochy